the Colonel’s Bequest is one of the few Sierra games to focus more on the characters than puzzles. Although solving puzzles is required to obtain a high score, it is more important to discover information about the characters’ backgrounds and relationships with each other. Regardless of the importance of these elements, it is possible to finish the game without solving any puzzles, discovering many important details about the characters, or even identifying the murderer.

Although some actions are recorded and scored at the end of the game, there is no discernible point system. In order to aid the player in achieving a higher score during their next attempt, upon completion of the game, it reveals hints and information about things that were missed. This implies that the game is intended to be replayed.

Characters make plans to be in certain places at certain times, which allows the player to follow them. Characters may get annoyed with Laura if they catch her snooping on them or asking too many questions, although this is obvious only in dialogue and the plot is not affected.

Death lurks around every corner, but Laura Bow is almost never threatened by the mysterious villain because she is not related to the Dijon family. Staying consistent with other Sierra adventure games, most deaths experienced by the player occur by accident or misadventures such as falling off a balcony, or being crushed by a falling chandelier. However, the player may be killed by the murderer in the later phases of the game. For example, the murderer’s arm reaches out at specific locations and snatches Laura away. In another case, the murderer appears in the darkness and strangles Laura to death. One of the more notable non-accidental deaths occurs when the player simply attempts to shower: the murderer stabs Laura in a reference to the Alfred Hitchcock film Psycho.

The game’s unusual title can be accredited to Sierra’s long-standing tradition of including “Quest” in the title of nearly every graphical adventure they published. A bequest is a legacy or gift handed down to someone in a will. Other “Quest” games include King’s Quest, Space Quest, Police Quest, Quest for Glory (which was originally titled Hero’s Quest), Conquests of Camelot, Conquests of the Longbow, and Goblins Quest 3 (originally titled Goblins 3). 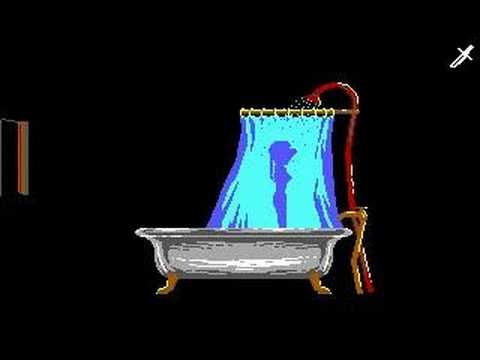